The Bare Facts About Koalas

Despite their likeness to teddy bears and our natural inclination to want to call them koala-bears, koalas (Phascolarctos Cinereus) aren't even remotely related to any of the bears.

Most Australian animals that aren't either fish, birds, insects, or reptiles are marsupials—animals which carry embryonic youngsters (also known as joeys) in pouches unlike their mostly furry mammalian counterparts in the rest of the world. Any similarity between marsupials and non-Australian placental mammals is mostly coincidental and contingent on the different environmental factors each animal needs to adapt to, based on its respective individual geographical conditions.

Koalas are listed as a "vulnerable" species in several states in Australia. While there were an estimated 10,000,000 koalas in the year 1900, there are about 100,000 left only 100 years later, with most living on private land. Some estimates report that there are only 2,000 to 8,000 koalas in the wild with population having dropped by 90 percent in around a decade.
Australia's East Coast where most koalas still live, is the fastest developing housing area of all first-world countries. Eucalyptus forests, which the koalas depend on to survive, disappear quickly. Koalas need to come down to the ground and travel larger distances to find other trees or mates. This subjects them to their number one enemies: cars and dogs.

Each year, approximately 4,000 koalas that were attacked by dogs or hit by cars get admitted to koala hospitals. Only an estimated 20% of those admitted actually survive to be released back to the wild.

You probably already know that the koala eats only eucalyptus leaves. But did you also know that: 1. Not all eucalyptus leaves are suitable koala food 2. Koalas have two thumbs on each "hand" 3. Their calls are so different from their appearance that the Aborigine people connected them with the bunyip, one of the most fearsome creatures in their lore 4. Joeys (baby koalas) stay in their mother's pouches for six months; when they are born, they are hairless, helpless, and less than an inch long. 5. When male joeys are grown enough to leave their mothers' care, they must go looking for new territory in which to live 6. The koala population is decreasing by an alarming percentage each year, due to habitat loss, drowning in swimming pools, injuries and death from cars, attacks from domestic pets, and disease.

Click on any of the icons above to download a free book excerpt from Koalas: Zen in Fur, pictured above.

For more interesting facts about koalas, and ideas on how you to can help with koala preservation efforts, the links below also offer useful information:

For the Record: The Teddy Bear Connection

Although koalas are not related to bears, there is actually a teddy bear connection. While original teddies had more bear-like features, they generally changed slowly over time to take on a more koala-like appearance with rounder face, less pointy snout, often fuzzier ears and lighter fur. It doesn't take a lot of imagination to see how these two are indeed related. While plush bears appeared approximately at the same time in both New York and in Germany at the turn of the 20th Century, and, although it's been debated who actually invented it, America was clearly the originator of the name.

Just for the record, the teddy bear was named after former U.S. President Theodore Roosevelt whose nickname was "Teddy" and who enjoyed bear-hunting. The name is said to have come from an incident on a bear-hunting trip in Mississippi in 1902 when Roosevelt's attendants found and caught a juvenile bear. 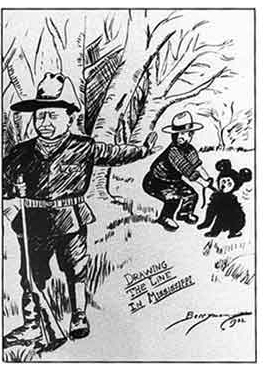 Roosevelt refused to kill the lassoed animal, calling it "unsportsmanlike", and "teddy's bear" was immediately publicized by political cartoonists. The first such cartoon appeared the following day, November 16: Clifford Barryman, an editorial cartoonist for the Washington Post, immortalized the incident as part of a front-page cartoon montage. Barryman pictured Roosevelt with his gun beside him with the butt resting on the ground and his back to the bear, gesturing his refusal to take the trophy shot. Written across the lower part of the cartoon were the words "Drawing the Line in Mississippi," which coupled the hunting incident to a political dispute.

Morris Michtom and his wife Rose displayed two stuffed bears in the window of their Brooklyn store shortly thereafter (February 15, 1903), and received President Roosevelt's permission to call them "teddy's bears."

German toymaker Margarete Steiff had started to produce stuffed toy animals in 1880; the first one was a little elephant. Her nephew Richard Steiff convinced her to produce a toy bear cub in 1902. It was not very popular in Germany, but at the March 1903 Leipzig Toy Fair they were able to sell a shipment of 3000 to an American merchant.